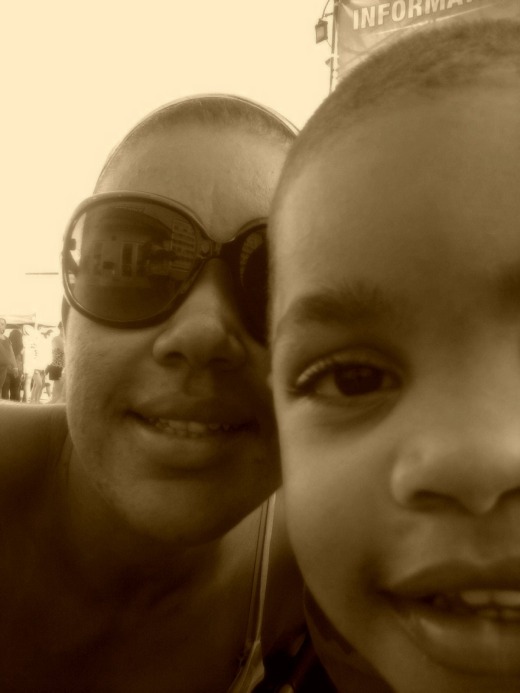 SuperMama and the Infamous SuperBoy

i have a most interesting son. he turned four in april and everyday he says or does something that makes me laugh. i love to watch him play and discover new things or work himself into a better understanding of new vocabulary with a question and answer session. he learns something new everyday and so do i.

a couple of weeks ago, i went to see a comedy show at the local casino. thanks to Facebook, i won tickets and thanks to my aunt, i had a very cute new dress to wear. i don’t style my hair everyday or put on makeup so not only did he notice that i was doing these things, but he was questioning me repeatedly:

“mommy. wasshu doonan? what’s that you hair? what that you face? mommy go bye bye??”

i told him what i was doing and that yes, i was going bye bye. then i put on the dress! oh no. strapless and short. i had on some shorts underneath for obvious reasons and i followed that all up with heels. lord love a duck. you woulda thought i was naked. he looked at me, shied away a little, touched my arm, pushed me and then said:

poor SuperBoy. upset that his mama wasn’t just a mama but a hot mama leavin’ for a night out on the town. i left, enjoyed myself and as soon as i returned home, my son (who should have been asleep) repeated himself:

i retired my cute outfit for the evening, washed the makeup from my face, tied my hair up and changed into my ever-so-comfortable and familiar lounge wear. i laid down next to him and he stroked my face as if he was ensuring that i had shed my hot mama persona and returned to just plain ole mama. he gave me a hug and a kiss, turned his head and fell asleep within minutes.

i will be going on vacation at the end of the month and my sweet little man has escorted my aunt and i on several shopping trips. we have been so many places lately and tried on so many clothes that he actually stops outside the door of any clothing store stating:

my aunt and i laugh and joke with him that we are just training him to have patience and tolerance for his future. he is such a ladies’ man and so very handsome, we are certain that he will be on many more shopping trips. whether he wants to or not. i said to him:

“bubb, this is what girls do. we shop. we do other things, but we love to shop.”

he did not agree. in fact he refused my statement and shot it down with his own:

“no mommy. no clothes. no more stores. YOU NOT GIRLS.”

yes. he told me that i was not a girl. hahahahhah! isn’t that hilarious? at first i just stated that “yes” i am a girl. that didn’t work. i tried to point out that my aunt and i are both girls. we both carry purses. nope, didn’t convince him. i tried to bring in other girls that he is familiar with :

the two of us have tried on lots of outfits and dresses. he doesn’t offer any criticism on shirts, blouses, pants or shorts. but dresses are refused. every dress that i have put on was followed immediately by his signature statement:

during our shopping adventures we have also tried on many pairs of shoes. many. some tall, some short, some flat. he stands firm on his “not girls” point of view. keep in mind, that this has been going on for three weeks now. three weeks! well, just the other day we went into a shoe store, mostly women’s shoes. i tried on several pairs of heels and sandals. he just looked at me and looked away. i found the sale section (my favorite section in any store) and i pulled several boxes from the shelf. my feet are wide and some shoes require a little finesse to get them on. he sat down beside me, but found more interest in the young lady that was helping her mom picks shoes for a class reunion. i tried these on, tried those on, asked him to put them back. he complied. he bounced around screeching and giggling trying to get this near-twenty-year-olds attention. hmph!

anyway, her mom and i chatted back and forth as we tried on these and those. we both went through several pairs and then went back to the first pair. as she and i stood there in black heels, talking, her daughter said “mom, what about these?” something about that statement brought the realization to my son that yes, in fact, his mom is a girl. we continued talking and as i sat down to take the shoes off and return to my mama-style and ever-so-comfortable flip-flops, my son says:

he finally admitted it. it was just so sweet. he almost seemed a little perturbed, but he had been through many experiences and it seemed as if he sorted through them one by one and finally decided to submit to the asinine notion that his mother was in fact a girl. preposterous!

he held my hand from the store to the car. i placed my new shoes in the trunk, secured him in his seat, kissed his forehead and shut the door. as i navigated myself around the trunk end of the car to the driver’s seat i smiled and giggled a little knowing that my son had turned another corner. he has no true concept of the differences between boys and girls, but just then he came to understand that his mama was a girl. the jury is still out as to whether or not that’s a good thing for him. but for me, it’s great. after thirty-six years as a girl, half of that as a woman and four as a mother, i have my son’s permission to actually be a girl. yay!

this picture is not at all related to the story. it's just a great face made in complete and total opposition to my request for him to "smile".