have you ever been to a concert? do you have a favorite? i do. i have seen several artists at most of the local venues and i think that i enjoyed every single one. a few of them stand out louder than the rest.  they are vivid and unforgettable.  what is your favorite souvenir? ticket stub? t-shirt? program? i think i have all of my ticket stubs, and for most concerts i have a t-shirt. some of them have been sacrificed along the way, but i remember them well.

leading my recollections is always lauryn hill.  i saw her at the forum, when it was “The Forum”. my bestie and i had floor seat tickets, for about $35 during the miseducation of lauryn hill tour. miss hill had bronchitis and advised us that she would do her best but her voice might not make it. she was alone on stage with a set of lockers and a classic school desk for her decor. at one point she had a horn section on stage as well as two dj’s. it comes to mind first because it was more than i could have ever expected.  she even introduced us to her son zion, who was a toddler at the time.  good times.

the next favorite memory is that of the isley brothers at the greek theater in august. what a magical concert. shannon and i were enamored with oldies. we were in love with the isley brothers and had just begun our twenties. and, the greek theater! have you ever been there? it is phenomenal. outside open-air venue with classic stadium seating. it was a warm and clear summer night. the greek is high in the sky, next to the griffith observatory. the stars looked like christmas lights. i think i stood for the entire concert. i can close my eyes and teleport back in time. i can feel the warm air on my skin. the cold beer, sweating in the plastic cup in my hands. the music intoxicated me as i swayed, swooned and hummed along.

another favorite memory includes the ever handsome, overwhelmingly gorgeous, significantly swaggered crooner: maxwell.  my bestie, shannon, and i saw him at the balboa concert hall in san diego.  it was so beautiful.  even when the congo drum fell over and the band had to regroup.  shannon and i were completely under dressed for the occasion. that did not affect our good time, at all.  there are more… janet at the pond. prince in honolulu.  salt n pepa in honolulu. all of those concerts were wonderful in their own way.  but none of them stands up to the memory of the beastie boys concert.

i lived in hawaii from the age of 19 to 21.  i guess that was the “finding myself” chapter.  i lived with my mother, brother and sister for almost two years.  it was the first and only time that we all lived in the same place at the same time.  i had a mantourage (thanks kim) of non-hawaiian born surfer boys.  brian, ryan, rob and jarrett.  i met them through my friend lance.  those were good times.  when i decided to return home to california, it was springtime.  the boys and i tried to pack every minute full of memory makers.  many beer drinking friday nights followed by surfing saturday mornings.  who me? surf?  umm, no.  yes, i tried once and i have the scars to prove it.  ’nuff said.  anyway, during that time, we went to many concerts.  local talent, big name talent, any talent.  i saw fishbone, ben harper and weekly, i was entertained by natural vibrations.  lookumup.  the last concert i saw before i left was the BEASTIE BOYS. you know who they are?  familiar with them?  what image comes to mind? this?

either way, whether it’s one of those albums or another, you get who i’m referring to.  they were going to have a concert at the turtle bay hilton resort on the north shore of oahu.  i think it was about one week before i left hawaii “for good”.  the concert would be on the retired beachfront golf course.  i know, right?  could it get better?  yes!  and it did.

brian and i decided to go.  we bought tickets and circled the date on the calendar.  the countdown began and we were ecstatic.  concert day came and we were ready.  i don’t even think the beastie boys were scheduled to take the stage until 7 or 8 o’clock at night.  more like 8.  i wore my brand new low top red chuck taylor all stars.  i wanted to “break them in”.  we were on the north shore by lunch time.  we parked on the side of the road in a long line of like-minders amongst the 7 foot tall sugar cane.  by two o’clock the line of cars was miles long.  we had an ice chest, some fast food, music, and all the patience in the world.  the gates opened about 3 or 4.  we were directed to our parking spot accordingly and the tailgate party began.

we hung out in the parking lot for hooooooooours.  eating, drinking and yukkin’ it up with the other peoples.  as the sun began to set and the island breeze began to grow, the natives began to get restless.  we eventually gathered at yet another gate, where we hemmed and hawed until we were granted access to the actual concert site.  and what a site…

as i stated earlier, the concert site was on a retired golf course on the back side of the turtle bay hilton resort.  the golf grass was still there, but the determination of the beach pushed through and spotted the green with mini sandtraps.  the stage was black and out of place.  just off the green was the beach.  literally.  15 feet from the stage were waves of warm pacific ocean.  the sun was setting and the scene was set… 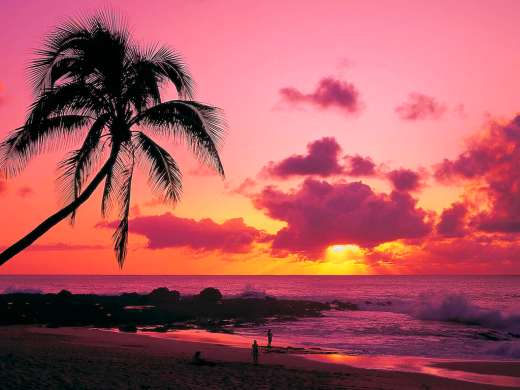 the darker it got, the more restless those natives grew.  i can’t even remember the opening act (that ice chest in the parking lot stole a lot of my memories).  but they didn’t even take the stage until it was almost dark out.  by the time the beasties set adidas on stage, it was black outside.  except, it’s never pitch black in hawaii.  the stars shine so bright.  gosh, it really was magical.

the stage lights started to flicker in a strobe light like manner.  and the familiar sounds of pre-concert chaos started; the “wicka wicka” of the turntables, the “yo yo yo HAH-why-YEE!” from the familiar voices of Ad-Rock, Mike D and MCA!!  “and the crowd goes wild”…. and still the stage is pitch black.

the volume of everything begins to increase exponentially.  the crowd of thousands begins to move and pulse as one.  the stage lights flicker again and there was a hiroshima sized dust cloud ascending slowly into the sky.  the retired golf course was not the ideal concert venue for this one reason.

i would love to share the most intimate details of this concerting experience, but as i explained earlier, that tailgate party ice chest continues to hold the majority of my memories.  i can tell you that i remember paul revere and brass monkey.  i also remember in a brief moment of concert silence i shouted out

and in return i got “and we love you back.” it still makes the hair on my arms stand up.

what i most remember is that the entire crowd was moving.  there were so many people and we were stuck to one another. seriously. at some point, brian and i were sucked into the crowd and were no longer able to take just one step back and be safe.  we were in.  for good.  and that was the beginning of the end.  i have played many sports and done many things on an athletic level.  but i still get winded, easily (i had recently discovered that i had allergies and asthma). it was warm out, and the people were warm, sticky, sweaty or clammy.

it was difficult to maneuver and eventually i lost the battle.  i started to get light headed which led to tunnel vision.  usually, i turn colors when all of this is going on and brian must have picked up on it.  he was talking to me, but i haven’t any idea what he said.  he grabbed my hands and wrapped my arms around his neck.  he did an about face and began to lead us out of the crowd.  he fought and battled and made his way out, with me in tow, his living super cape.  i think i was actually passed out.  ((alcohol + sun)x hours of the day = blackout).  the next thing i know, i am lying on the ground. i feel the poke of grass and hear the crunch of the sand under my weight.  the warm breeze caressed my body and i got a chill because i was completely covered in sweat.  i remember several voices “is she alright? is she alright?” and brian assuring them that i just “needed some air”.  he was right.  a little air and everything subsided.  brian suggested that we go home.  we’d had a long day and you can never really convince someone that you’re “alright”, after you’ve passed out.

he held my hand and we walked towards the exit.  he smiled and we giggled knowing that we had a good time.  it was indeed the best concert ever.  he asked if i wanted anything before i left, and in fact, i did.  i wanted a t-shirt.  he suggested that the lines were too long and that we should make an express exit.  i informed him that there was no way i was going to leave without one.  we waited in line, i made the purchase and we proceeded to the car.

when we finally got to the car, i realized then that i was covered from head to toe in mud.  not actual mud, but golf course beach dust mixed with sweat.  my entire skin surface was covered.  i had mud plugs in both nostrils.  mud in my ears and on my legs, underneath my jeans.  i even had mud, between my toes, on my socked feet inside my all stars.  and speaking of the all stars; they got broke in alright.  they were no longer red, but dirt covered red.  the white toe was some sort of brown with the identifiable marks of other people’s shoes.  one of the eyelets fell out and the laces would never be the same.  i still have those shoes, and i love them.  i’m sure there’s beastie boy infused turtle bay hilton sand in them somewhere.

that t-shirt is my favorite t-shirt.  it has been worn and washed so many times that it looks almost like gauze.  it attracts attention wherever i go and my brother has vowed to have it for his own (as if).  i’ve run in it, washed in it, barbecued in it.  i’ve cleaned the house in it, worn it to work and worn it to bed.  i fear that the time has come that i should retire it, before it is irreparably damaged.  it doesn’t just remind me of a concert.  it reminds me of one of the best times in my life.  it brings back places, smells and smiles.  it brings me back to a time that needs no introduction, but deserves memorialization.  it is a time capsule and it is very dear to me.

below, you will see the shirt that earned that night.  i have it on right now. 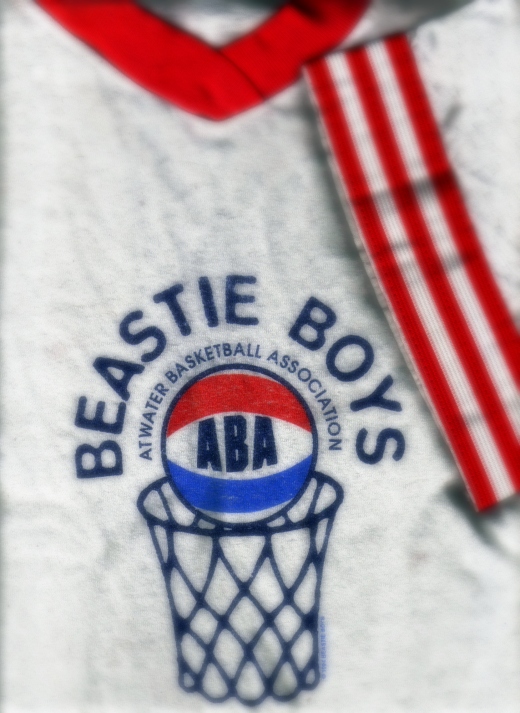