October 2, 2017 epiphanys, momming, these are the days of my life 1 Comment

people are rude. people are rude AF (as f***)! I apologize to my readers who are of a more conservative nature, but some things really get under my skin. rudeness and lack of “home training” is at the top of the list.

you know what home training is right? it’s basic! it’s almost innate… well it WAS innate. but now with the world closing the gap electronically there seems to be a severe lack of etiquette.

let me give you my first example: i am in a service office, the office of my cable company. there are 40+ people in here and it’s already after closing time. only three employees are still working. when i walked in i was 27th on the list. i’m currently #10. it’s the after-work hour and there are lots of tired and hungry children in here. there is a young lady (she’s really not a lady). she’s wearing slippers, pajama pants and certifiable bed head. she walked in on her phone and left without ever getting off the phone. the problem is that while on the phone she proceeded to get louder and louder (and louder) while explaining her very personal story and flagrantly cussing. she was no more than 2 feet away from someone’s child and she exercised zero filter, zero cooth, and zero maturity.

i cuss. mm hmm, it’s true. i know plenty of people that do. but I do my best to lower my voice and control myself in public. especially within whispering distance of someone’s child. like i said, i cuss. my kids have heard it and hear it. my toddlers have told me to stop. my nine year old (he’s ten now) has asked me to stop. but my occasional slips are nothing like the run-on sentence of expletives that girl was spewing.

my next observance was of the greeter. this was my second time at this office and my second time seeing him. while polite, he seemed to be low-key racially profiling the customers. for the Hispanic people that came in behind me, he greeted them in Spanish. with me he was rather generic. with the young Hispanic couple that was there before me he continued to call the guy “homie”; and for the two black guys that came in three minutes before closing he only referred to them as “dawg”. hmmmm. is this the 2017 approach to customer service? poor choice if you ask me. poor on his part, but much poorer on the part of his supervisor, and manager.

my next observance was literally set out before me. i didn’t ask or prompt anyone for it: 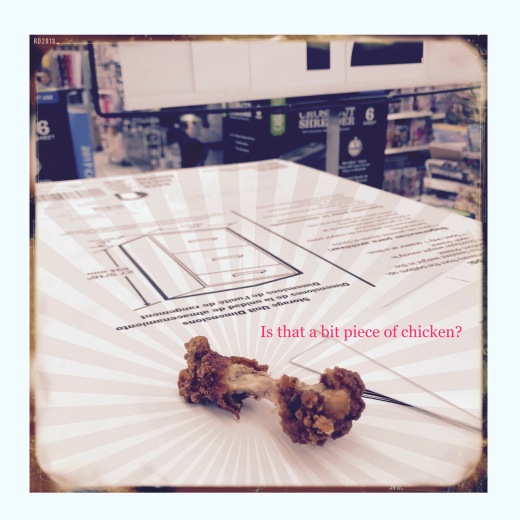 what has to be said about this? anything? anything at all…?

someone was eating (i’m going to guess that this is stolen fried chicken from the deli), while shopping, and was just flabbergasted by the distance to the nearest trash can so they just laid their partially eaten fried chicken drumstick on top of this box… and they also chose not to purchase the two overturned greeting cards (probably because of the chicken grease stains would be my guess). i mean, seriously.

what is this the result of? why are people so flagrantly disrespectful to everything? 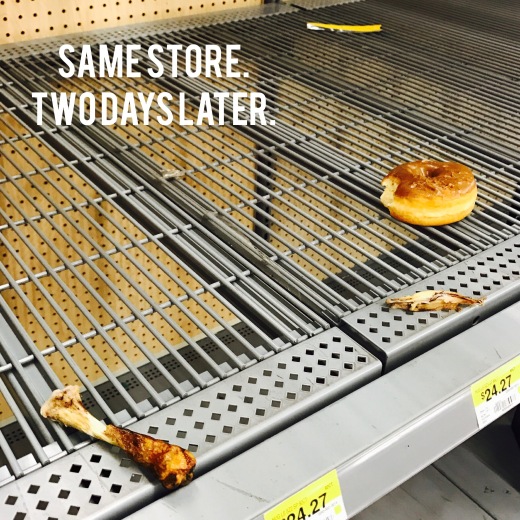 if anything is clear, it’s that Walmart should really tighten up their security.

how many people are walking around eating chicken, and donuts, and opening packages of …. peanut M&Ms? teddy grahams? or whatever that piece of yellow packaging belonged to. trust me when i tell you that i understand there are some families that aren’t able to afford much. perhaps this is the result of a food-poor residence and one too many cries of “mama, i’m hungry”. my observance is simply of the trash left around. it’s a sad world that we live in when there isn’t enough food to go around, but at the same time a stale donut can be discarded on the nearest shelf. you don’t have to be a pig. you just don’t.

it’s not just the fabulous shelves of Walmart that are covered with litter. this is a photo just outside my front door.

it looks like this all of the time. someone in the complex has a “store” in their apartment. they furnish the kids with all sorts of “hot chips” and “poppers”. in other words; unadulterated and unlimited amounts of sodium, MSG, food coloring, food dye, hydrogenated this and that, a plethora of preservatives and artificial flavors, and sweeteners and the ever present HIGH FRUCTOSE CORN SYRUP. the end result (besides the overweight, hyperactive, pre-diabetic juvenile population) is all of this trash where trash shouldn’t be. i’ve complained. it didn’t help. NOT ONE SINGLE BIT.

i got an evil stare in a parking lot yesterday because the other driver was backing up and i guess they got offended that i didn’t just readily stop for them … as they were in the wrong. i’ll stop, i’ll wait — because you’ve clearly got more important business than i do. i got a strange vibe from the lady in front of me in the grocery store because i moved the divider that she’d placed between her groceries and mine. really? you’re mad because i moved the divider closer to your food? ok. weird, but ok.

i could go on, but i think you get the picture. there’s entirely too much selfishness in this world. everyone just droning on about their own lives and not showing an ounce of care, concern, or love for their neighbor, their neighborhood, or their environment. it makes me sad. it’s always made me sad, but it weighs heavy on me as a mother. i can only hope that my children will pay attention to my words, my actions, and my prayers that the world changes for the better — and that it starts with us.

One thought on “no home training”