my grandmother should have turned eighty-nine today. her name is Arlena. i know that the word “should” sounds a bit harsh and implies overwhelming selfishness, but if it had been up to me she would have outlived me and my children. i know in my heart, that the eighty-two years she spent here was more than enough for her and that she longed to be with those that she loved but had passed on before her. including all of her siblings and her only son, my father.

gertrude and i; brunching at the mission inn for my twenty-somethingth birthday.

she’s my favorite person. she was born and raised in oklahoma. moved to california in her twenties, married, changed her name and had kids. she is still Arlena to many people, but i called her gran, or gertrude. i grew up with her. she raised me and taught me a sizable amount of what i know and everything you can’t learn in school. she was always eager to share and maintained an honorable quest for new knowledge. occasionally she would ask me a question, with a hint of mischief in her eye. when i would respond with my answer, she would say “that’s right, but you didn’t think i knowed that didya?” she was a hoot!

me and my gran! shortly after she got legal custody of me.
i think i was about 8, which made her 58. doesn’t she look sweet?

Arlena wasn’t just my grandmother. from the age of seven to almost thirty-two (when i became a mother), she was my world: my hero, my father, mother, sister and best friend. she took care of me, provided for me and filled in the gaps as best she could. wherever there was lacking, my gramma spackled in love. she had an abundance of love. her cup overflowed with unconditional heartwarming, bear-hug type love.

she was a sweet girl full of country charm, southern sass and good ole fashioned etiquette. to me, she was the queen. her siblings called her “Brat”, as she was the youngest of five, born and raised in ardmore, oklahoma! 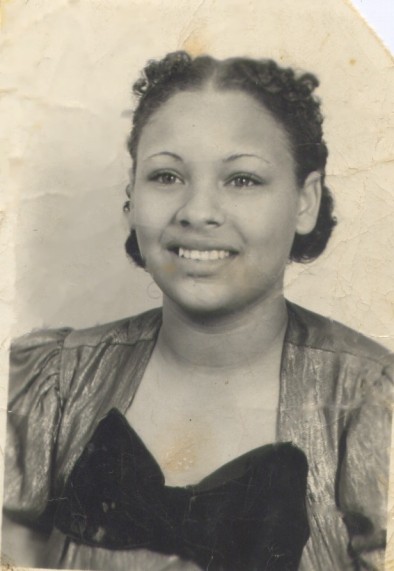 she said she was about fourteen in this picture. she manicured her own eyebrows with a straight razor!

she had a sixth grade education, but stands alone as one of the most intelligent people i’ve ever known. she was a jack of all trades, with book knowledge, street knowledge, and the knowledge of experience. she was kind, generous and genuine. there was nothing fake about her and you knew when you met her. i have many friends extending as far back as elementary school that continue to ask about her. the mothers and fathers of those friends attended her funeral and shared their heartfelt love and admiration for her. when people ask about her, i always lead with “she was the best”. she really was.

free from oklahoma! fresh to california.
all of twenty years old. and gorgeous (second face from the left).

below is a photo that i think epitomizes my grandmother’s persona. from left to right is her sister Arlevia, her mother Annie Pearl, her eldest sister Ardailure and her. the front row is husbands, but i can’t remember one of the names, i don’t know who the other guy is and my grandfather is missing from this photo. but i don’t think i need to tell you the difference. which one of these women is not like the others? three old maids grimmacing in house dresses standing next to my smiling glamorous strapless choker wearing sunglassed hottie of a gramma!

when the bestie and i were just lil bits, my gramma and shannon’s nanny (from arkansas) used to cure and trade salt pork. do you know what that is? it’s a huge chunk of bacon-like pork with a god-awful ratio of fat to lean on it used to season foods. particularly beans and greens. my gramma used to buy it and put it on the top shelf of the pantry on top of the holiday china. she would leave it there until the white fat turned yellowy translucent. and then she would send it with me to give to shannon’s gramma. seriously. i mean, can you imagine? it used to make me shudder, but they would send them back and forth and be pleased as punch to receive.

during the years that we lived across from shannon’s family, my grandmother owned and operated a group home for developmentally disabled men. i believe she cared for more than a dozen men over thirty years. these gentle souls were once referred to as “retarded” or “slow”. for me, they were friends; the minds of children locked in the bodies of middle-aged men. she cooked and cleaned for and the same five “guys” for most of the life i knew with her. i don’t know where she developed the patience to raise her own children, care for handicapped children that weren’t hers and then love and care for me, before retiring and caring for preschoolers in the local head start system. i can’t say that i know anyone as compassionate as her. it takes a big heart to care for others, especially children, and children with disabilities. she did it all with a smile on her face. i don’t recall hearing any complaints about any of it. not once.

she was also a diehard dodger fan! the woman bled dodger blue! she was a baseball fan, but more of a dodger fan. and she looooooooved Vin Scully. she proclaimed that he was the best sports announcer to ever hold a microphone. she would watch the game on tv, but listen to Vin Scully on the radio. she could not stand to hear another voice pretending to know what they were talking about. through the Special Olympics program associated with her group home, we actually met several dodger players. they came to SBVC and signed a baseball that i cannot find. the players included Mike Scioscia, Mike Anderson and Orel Hershiser. tragic? I KNOW!!! in the last few years before she passed, she would call my friend Alfonso for baseball game information. her eyes were pretty bad and she didn’t have an understanding of the directv channel guide to surf through and find what she was looking for. she would call me to call him, and one time i just said “call him, gran”. so she did. later, he told me how he enjoyed receiving those calls. he said that he looked forward to hearing her voice and in knowing that he’d made her happy.

not a day goes by that i don’t think of her. she passed away (i really hate that phrase) seven years ago, on her eighty-second birthday. she had been ailing for some years. a horrid concoction of long-term hyper-tension, diabetes, and congestive heart failure. but what a marvelous eighty-two years it was! i was a part of her life for thirty-one years and i cherish everyday. my memories of her are abundant, thoughtful and often hilarious. again, i tell ya, she was a hoot. she could always make me smile. she’d been on hospice care for over year at home before we were no longer able to care for her. she was admitted to a hospice facility, and passed away just a couple months later. she was planning a thanksgiving feast.

it took a few years before my aunt and i were able to try and enjoy the thanksgiving holiday. with gran making plans to cook and needing our assistance, we were broken-hearted to say the least. thanksgiving had been a big deal in my younger years. over the years it had dwindled down to just the three of us and cooking a turkey day feast was a serious project that my gran just didn’t have the stamina for. she was excited and energetic about that upcoming thanksgiving. we’d discussed the menu and i was sent out to the garage and far reaches of the house to find miscellaneous pots and pans. old, antique, well-seasoned pots and pans that are part of the family. she’d even asked me to polish the silver (i’m rolling my eyes STILL at that undertaking).

in the last three years or so, my aunt and i have made our own thanksgiving. i don’t think we are “family ready” just yet. we enjoy the shopping and cooking, but it’s such an emotional event. last year i attempted my gramma’s sage-cornbread dressing (stuffing) and it brought tears to my eyes. i have no recipe to go by, so the secret lies within my nose and eyes. i’m looking for a particular texture, color and smell. i did pretty good. the peach cobbler was one level shy of gertrude-tacular, as well as the sweet potato pie. oh how i miss that woman!

she knew that i was pregnant but didn’t make it to see my sweet boy come into the world. i was five months pregnant with kenneth when she died. i desperately wanted them to meet. i could see the photo opp in my head of my sweet gran holding my sweet baby boy. my son named after her son. i’d hoped to share with her the joys and frustrations of my motherhood so she could laugh and heal me with her wise words. and now that i’m bringing the twins into the world, i just can’t imagine what she would say about my shape and size. i would love to hear it though.

while this post may seem somber, i am not as sad this day as i have been on this date in the past seven years. i miss my grandmother dearly, but i feel her love and guidance running through my veins daily. i wouldn’t be who i am without her. she taught me the most quintessential things that make me exactly who i am supposed to be. i cherish the memories of her, the stories she shared and the things she taught me. i wrote about her today to honor her existence in this world, in my life. i wrote about her to share with you the most amazing person i’ve ever known. and in the interest of not completely bumming you out, i will leave you with this:

me: gran, don’t you want a friend or a boyfriend type person? someone to go to lunch or the movies with?

gran: honey, i already get headaches, i don’t need one with a name.

on another occasion, i asked the same question and her answer was:

sweetheart, if i’m going to babysit, i want to get paid. you don’t get paid to babysit grown men at the movies.

BAM! it don’t get much more honest and southern than that! she was a hoot!