this is my father. 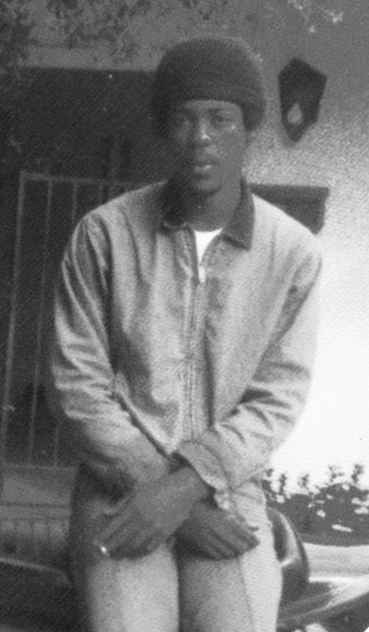 this may very well be one of the last pictures taken of him. it was taken in october of 1977, outside of the house i grew up in. my father’s name was Kenneth. that is also my son’s name. did you notice i said “was”? i guess his name is still Kenneth, but he is no longer. the fact is, in october, he will have passed away thirty-four years ago. i know, a total bummer right? yeah, for me too. trust me when i tell you that if i could enjoy and celebrate the day known as “father’s day” i would. but for me, it just pours salt in a very, very old wound.

i was only two when he died, and he was just twenty-one. we were taken from each other far too soon. in that photo he is leaning up against his motorcycle. a twenty-first birthday present from my grandmother just two months prior. that is the motorcycle that he crashed on. a crash that eventually ended his life. i have tried, really tried, over the years to find a reason, any reason, to celebrate on father’s day. but no matter what, i end up mourning. even now that i am a mother and my son has a father, i still can’t get into the swing of it. i have known some wonderful father’s over the years and i appreciate them for all that they are worth. but they are not mine.

i’d be a liar if i said that everyday felt this way. i have outgrown the “poor me” portion. i have moved beyond the anger, the disappointment and the general depression that come with not only losing a parent, but losing one that i didn’t get the chance to know. i hope this doesn’t sound too harsh, but i am thirty-six years old. he died when i was two and i can honestly say that i don’t have any memories of him. i only have photos and the stories that others have shared with me. i don’t remember what it felt like to look in his eyes and have him look back. i don’t remember his hugs or his kisses good night. i don’t remember him at all and perhaps that is the worst feeling ever. i don’t just have a missing parent, a missing family member. i have an emptiness that never EVER seems to fill. it won’t close, it won’t divert and worst of all it sometimes feels deeper and darker than the years before… mostly on father’s day.

i changed my profile picture on facebook to that of my mother, to honor her for mother’s day. almost everyone did and it was so nice to see. we left them there for the entire week and changed them that following monday. today i noticed the photos changing to that of the dad’s. i did it too. to show my pride and to honor him, but every time i looked at the picture i felt that salt again. and boy did it hurt. it was only there for a few hours, and i actually had things to do and left the house. but that picture didn’t ever leave my mind. as soon as i returned home i changed it back to a picture of me. it’s just too painful for me to see his face over and over. writing about him now has brought me to tears. and oddly, i always try to hold them back thinking “there’s no need for this”. no matter how hard i cry today or tomorrow, father’s day will bring a whole new bout.

i have tried to ignore it. i have tried to channel it and i have even tried to actually celebrate it, but my heart’s never in it. all i really wanna do is curl up in a ball and say “why me? why me?” but no matter how many times i ask, i never get an answer. even if i did, i don’t think it would make me feel any better. i recognize the importance of celebrating the people that we have loved and lost, but i would rather black out the day on the calendar and sleep right through it. i’d rather not see the signs posted to “not forget” or the advertisements for ties, tools and daddy related stuffs. this is one particular holiday that i could really do without. so yeah, father’s day stinks. period.

here are my favorite pictures of him. i left them just the way they were when i scanned them. discolored from the magnetic photo albums, the sun, the dust and the photo frames. i have preferred to leave everything of his… just as it was. i did the best i could to keep them in some sort of time sequence according to what i remember of what my sweet granny told me. i could be off a little, but you’ll get the picture… 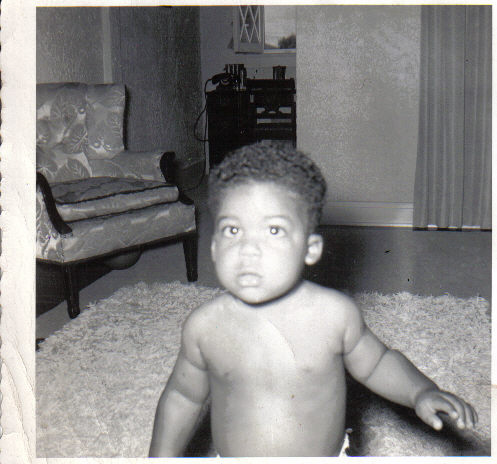 here, at just a little over a year old.. 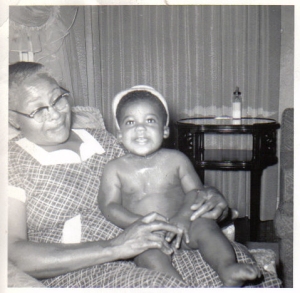 my dad and his grandma: Annie Pearl

decked out in a three-piece suit WITH bowtie 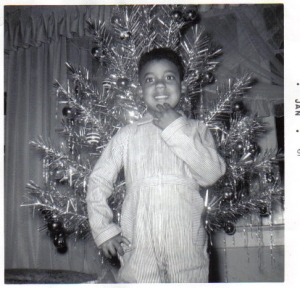 the little conductor, at christmas. my gramma said he was ecstatic to have received his train set.

my dad and my gramma. i still don't know why he looks so scared.

i think this is my favorite of all time. i think it was from a christmas morning.

my dad on the far left. always tallest. this photo was in the newspaper. i don't know why. 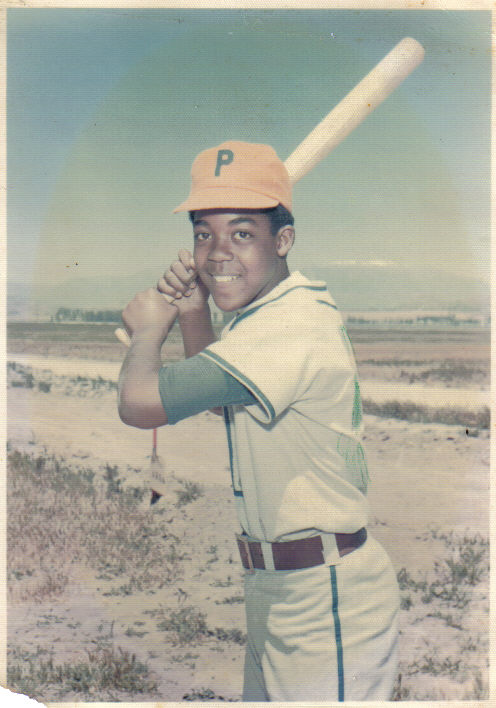 all of the potential in the world... 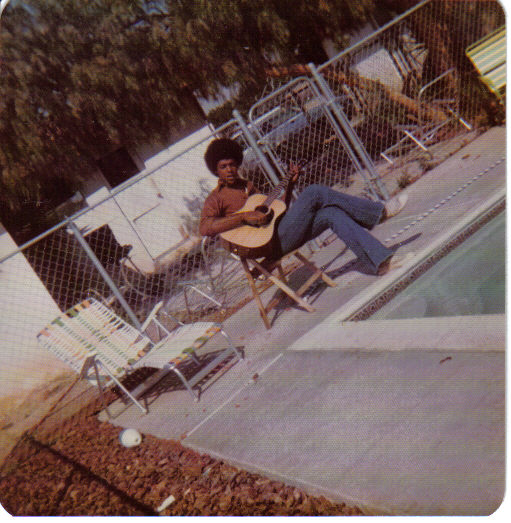 a man and his guitar. i still have the guitar.

and here are the only pictures of us, together: 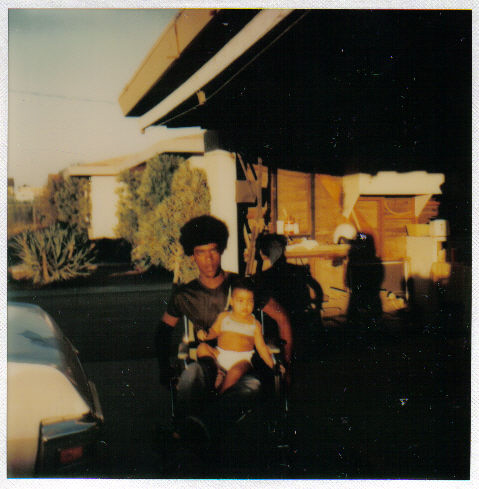 he had surgery for his horrible fallen arches. arches he passed on to me. and we are next to his beloved GTO (i think).

lovin' his baby girl. my gramma said "he never could get enough of you." 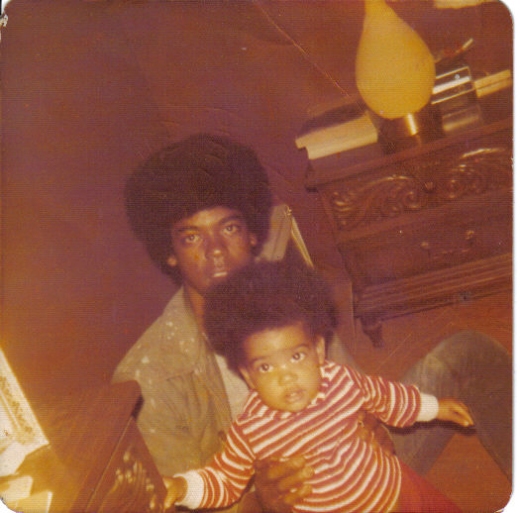 i've been told that whenever he was near me, braids and barrettes came out and the afro was picked, plucked and shaped. like daddy, like daughter.

so this, my lovelies, is why father’s day stinks. for me. i hope i didn’t break your heart. mine will be broken for all time. to you i say: love your fathers! LOVE YOUR FATHERS!! love your uncles, brothers, cousins and husbands. love your children’s father. love them because you can. even if you’re hurt or angry, love them. know that on father’s day i will not be happy or cheerful. i will not pretend to be something i am not. i am a daughter without her father and i will always be this way. missing him is my way of life, but it doesn’t get any easier. ever. you’ll forgive me if i don’t change my profile picture or come to your barbecue, won’t you?