... a work in progress and the comfortable insurance by the knowledge that "something is in the oven"...

life can be stressful. full of lists. full of tasks and errands. things to do, things to buy, places to go and entertainment for the eye. what’s your form of self-induced personal therapy? i’ve discovered over my blahtey-blah years that myyyyyy therapy, my way to therapize myself is to bake. yes, bake. baking, with like, an oven and stuff inside. june cleaver housewife style with utensils, gadgets and an ever-handy-and-extremely-cute apron. it is not just a therapy but a calling. a hobby. a lucrative interest. it’s fun and the reward is obvious: tasty treats to devour… umm, i mean share.

needless to say, i take my baking very seriously. not so serious that everything is measured down to the pinch and recipes followed in a sterile manner, but serious enough that i do not make or take phone calls while baking. i’m serious about it in a way that makes it so rewarding for me, and through word of mouth, for my  taste testers as well. i wouldn’t say that i can bake “anything”. i certainly have a familiar repertoire. i mostly focus on desserts, but i would be a lie if i didn’t say that i was kinda-known for my homemade handmade chicken pot pie. i think it’s to die for. it is one of those recipes that impresses more each time i make it. i am also pseudo-famous for my gramma’s recipe banana bread. that recipe is going to make me millions one day. hopefully i get the opportunity to go professional and worldwide with it. it’s gonna knock yo socks off!

in the meantime, i have dabbled in this that and the other. i have an extensive collection of recipes, cookbooks and seven years worth of “Cooking Light” magazine. i grew up in a one-woman household. that woman, lucky for me, was my grandmother. she had a group home for developmentally disabled adult men. she was their sole care-provider, and in-home chef. there were four of them, “the boys” as we referred to them, she and i. so everyday she cooked breakfast, lunch and dinner for six people. it is because of her, that i owe my love of food. now, let me be clear, i am NO foodie. not a foodie, not at all. i have a very limited set of “likes” where food is concerned. but that doesn’t stop me. she also taught me how to bake. i taught me how to cook (many years later), with the help of all those cooking light magazines, several choice cookbooks, and a lot of cooking tv. not to mention, the short time that i spent working under chef Jonathan at the convention center.

now, with that said, let me tell you why i love to eat, cook, and more specifically, why i love to bake. i have been loitering in kitchens my entire life. literally. having grown up with my grandmother in the group home setting, she spent a lot of time in the kitchen and i wasn’t far. i didn’t study her and mimic her every move, but i watched and surveyed. i’d ask a few questions from time to time. she would always answer without skipping a beat. i didn’t know it then, but there’s a huuuuuuuge amount of timing involved with the preparation of a three-course meal for dinner everyday. she taught me basic cooking techniques and everyday use of tools and other kitchen equipment.

as well, the bestie and i grew up across the street from one another. when i would spend the night, we would get up in the night after all other house dwellers had nodded off for the evening, and just sit in the kitchen. back then, there was a square wooden butcher block dealy-bob, on wheels, in the middle of the kitchen. it was the perfect ottoman for us, and the kitchen counter became some sort of tile covered recliner. we would pick at the ever-present food items; not excluding: a barrage of fresh fruit, some sort of bread or pastry type item and perhaps some leftovers from the previous meal or something from nanny’s house, all the while talking and laughing.

speaking of nanny, she was and continues to be the other thriving influence in the kitchen. she’s the only lady i’ver ever known to blowout two kitchen aid stand-up mixers. “doin’ what?”, ya ask. everything you can imagine. nanny is my bestie’s gramma. she’s from arkansas and was married to papaw for 60 years before he left her in charge of his dog. if you’re looking for nanny, you haven’t been in the kitchen. shannon (my bestie) and i grew up spending occasional weekends at nanny’s house. she was a certifiable short order chef every morning. she would ask in her adorable southern drawl:

and as adolescent brats our answer was most often:

her response was the same, without fail:

ahhhhhh, the good ole days. she would make for each of us, whatever we wanted. for certain, there were going to be biscuits and eggs. i think sausage and gravy was also a menu staple. nanny would make us … get this… homemade pop-tarts from leftover homemade pie crust and plum jelly, made from the tree in her front yard. what is not to love about that? i watched nanny make biscuits, dumplings, and all the cookies, cakes and pies you can imagine. she fries a mean chicken breast too. i watched her mix and make the most delicious food with her two little hands. the kitchen remained spotless and the refrigerator was always full.

that’s a lot of time in and around kitchens and all i was doing, at the time, was eating. out of that came a fondness for southern cooking, a need to sit or stand in or about the kitchen and a need for fresh fruit. my mom loves to cook too. visits home are always the best as i am provided the arriving meal of my choice: spaghetti and homemade half-wheat/half-white bread. mmmmm… good stuff. my mom taught me how to put what i liked together into something to love. she also taught me that i needed to make Love, my special ingredient. without love, nothing would turn out right.

so, as you can see, my love of cooking is organic. it comes from deep inside me. i love every aspect of it. from preparation to service. i most enjoy the bringing together of ingredients to create one masterpiece. i think that is why i enjoy baked goods so much. they all seem to start with the greatest of all cooking trifectas: butter, sugar and eggs. the only thing that varies is the ratio, temperature and mix time. isn’t that an amazing little factoid? the difference between a cookie, a cake and bread is just exactly how much you have of each of those items. 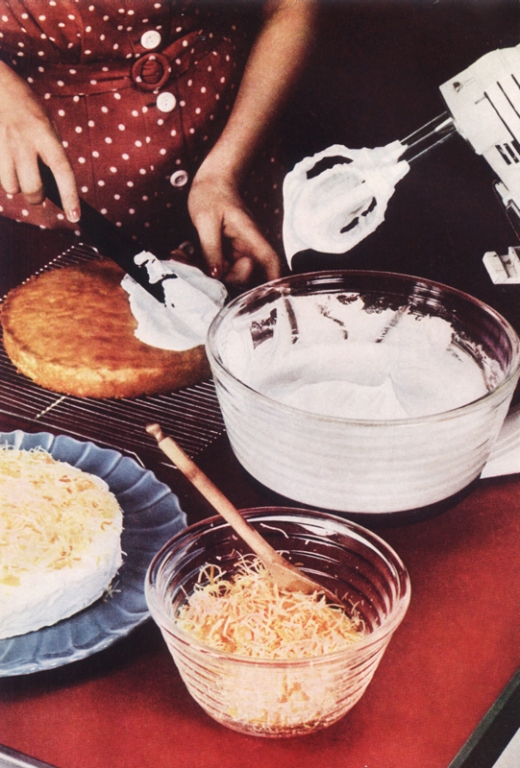 i’m going to say that where cooking and baking are concerned, i tend to stick to the script. i don’t usually vary from any given recipe too much. i believe that the learning is in using the recipe to make your ultimate goal. i also believe in conquering each recipe for its ratio, taste and texture secrets and then adapting that recipe for your own fiendish fun. methods and techniques are extremely important and necessary when baking. a recipe is simply a set of instructions. but it’s a detailed list and you can pretty much assure yourself that it is as abridged as it can possibly be. removing steps from a recipe is like skipping steps in math. you might have a reasonable facsimile of the final product, but something is not quite right. i use a recipe until i know it by heart. until i can know, by sight, how well it’s going to work.

baking is a controlled chaos. i clean up before i mess up, so that i may clean as i go in hopes of having a clean kitchen when i’m done. i pull my ingredients from the cabinets, drawers and refrigerator and line them up. i measure them all with my level of accuracy and start my process. as i learned in home economics, i familiarize myself with the recipe before starting. i try to have all the utensils and ingredients ready to go. step by step to the finished product. oh what fun.

(that means i’ll be back later with recipes, pictures and yummy reviews)